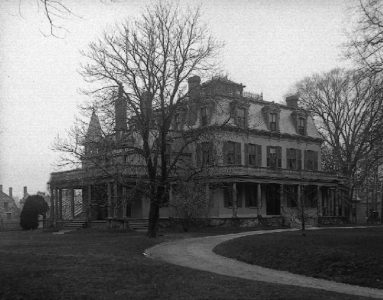 The James Arnold House stands at 427 County Street. It was built in 1821 by the housewright Dudley Davenport for Arnold, a native of Providence who became one of New Bedford's leading citizens. This Federal Style home has undergone many changes since its construction but is still recognizable behind these additions. Arnold's original home was "modernized" by his nephew, William J. Rotch, who inherited the property in 1869. He added the Mansard third story in 1873, perhaps to accommodate his growing family, or his increasingly large household staff.

Arnold is less well known for his choice of architecture than for his love of botanical beauty. He and his wife traveled to Europe many times seeking interesting trees and other plantings which would enrich their surroundings and his whaling ships allowed him to import exotic fauna from around the globe. He welcomed the citizens of New Bedford to visit his extensive gardens and grottos constructed on his property, and they became a point of civic pride. When Herman Melville came to New Bedford in 1857 he made a point of touring these gardens, though he was only here for an afternoon visit. Upon James Arnold's death, his $100,000 bequest to Harvard University, earmarked for botanical research, formed the cornerstone for one of Boston's finest attractions, the Arnold Arboretum. 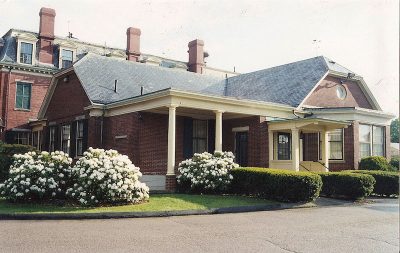 The dependencies on either side of the house were added when the building became the property of the Wamsutta Club in 1919. One is always interested to learn that this sedate private club was initially founded in 1866 to introduce the modern game of baseball to the aristocratic youth of the city.

The property has been named to the National Historic Register of Historic Places.

The James Arnold Mansion Inc. was formed on September 1, 2016 to preserve the property and educate the public on the historic significance of the Arnold property and its owners.